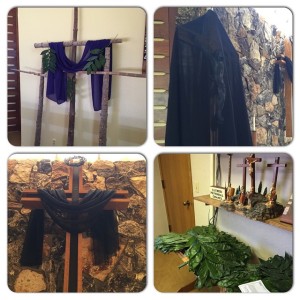 It’s a victory parade. That’s what the palms proclaim at least. Palms were cut to wave and proclaim victory after a great battle or even after the Olympic events in Greece they were given as prizes as the wreaths were wrapped in palm fronds.

And why not. The Gospel from the procession begins, “The next day.” If you look back at the beginning of John 12 you’ll see that it was six days before Passover (that’s Friday by the way), which means it was Sunday. Sunday before Passover Jesus has raised Lazarus from the dead and Mary anointed Jesus with the ointment and wiped his feet with her hair. That all was on the Sabbath, Saturday. That’s why there was at the same time the plot going on to kill Jesus as well as Lazarus.

It’s “the next day,” so we can see why there is a frenzy. Lazarus has been raised from four days dead. Jesus was anointed with a fragrance and perfume, though interestingly with a type used to for burial. And the people are excited. Hosanna, which means “save us now.” Even proclaiming rightly that He comes in the name of the Lord, as the Lord Himself. The King of Israel, the promised Messiah.

For the Pharisees, all was not lost. This man was living and acting and doing things as the Messiah. And the people were following. The knew of the Messiah and salvation He would bring. But they too were looking for earthly deliverance. Much like many Jews today, awaiting one who will restore the kingdom of Israel within its earthly borders.

But our Lord who knows your needs comes not to be an earthly king, not to gain large crowds simply for popularity sake, not to create a vast earthly kingdom, but to give you that which you need. He who has given you everything in this body and life, He who through whom all things were made (John 1) and provides more for you that you need comes to give more than we even think to ask. He comes to give His body and blood for you. He comes to forgive sins and restore peace with God. He comes to defeat death and give life.

He comes because of our selfish ambitions, our personal desires for earthly salvation. He comes to ride on in the preemptive victory parade. He comes to answer their shouts of “hosanna, save us now” to do just that. It just didn’t look like what they thought or imagined. Even though He had said it repeatedly, the Son of Man must go to be rejected, spit upon, flogged, and killed, and after three days will rise.

The tides will quickly turn. They didn’t even need social media to get a quick reaction and turn around. Hosanna and palms were trending but soon the trend and shouts would be crucify Him. That’s the glory. That’s the victory. And it will happen quickly. As we live through Holy Week, just think from the time of today’s palm procession to tomorrow morning, Jesus comes in victory but then clears the temple of the money changers and cursed a fig tree for not bearing fruit. By Tuesday morning, that fig tree is dead and withered. They will challenge His authority and He will teach about the end things. On Tuesday Judas will negotiate to hand Him over. He travels back the way in which He came, from Bethany through the Mount of Olives, a mere two miles away. Then comes preparations for the Passover. By sun down Thursday it is the start of Passover and Jesus gives us the very reason we don’t do Passover Seder’s now, the time is now, the Messiah is here in Jesus, it is fulfilled, here is the new testament, here is what you now do to not only recall but to actually receive the answer to the shouts of Hosanna, in this Last Supper meal that is His body and blood. Late that night He goes to the garden, prays, is handed over and is crucified by Friday.

It’s a whirl wind of a week. Weeks come and go very quickly but this week is everything gone through for your salvation. It is indeed the most holy of weeks. It is the Passion of our Lord who rides on this day in majesty to die. The palms are victory proclamations, but victory proclamations that come in death. For Palm Sunday’s victory is given that which we receive and recall this week, the Passion of our Lord, the body and blood of Christ given and shed for you for the forgiveness of sins.

It is this very thing that we live through this week. In reality it is this very week that we celebrate and live through every week. We proclaim “holy, holy, holy” recalling Isaiah’s heavenly vision of God Almighty on His throne and proclaim the very proclamation of the people in Jerusalem, “hosanna, blessed is He who comes in the name of the Lord, hosanna in the highest” (Sanctus of Divine Service.) Then as we eat and drink the body and blood of Christ, we hear His Word which proclaims and gives His body and blood (Words of Institution) and as often as we eat this bread and drink this cup we proclaim together the Lord’s death until He comes (1 Cor. 11:26). It is this Holy Week that frames and is our weekly communion liturgy as Jesus continues to give the same answer for our shouts of Hosanna and says, “here, my body and my blood given and shed for you for the forgiveness of sin.”

It’s a whirl wind week that whirls around weekly in a matter of minutes. And like the people, sometimes we miss it. Until Jesus is glorified. Until we come up and receive the fruits of His cross as He comes to us risen from the dead in body and blood at this altar today. Then, like the disciples, we remember the things He said and what He has done for us. That today’s victory march is preemptive and won in His death upon the cross. The the palms really should be brought back next week as victory is realized and complete in glorious resurrection. That as the year whirls by quickly these very palms have been kept in a closet for next year’s Ash Wednesday ashes, that this victory is ongoing and comes to us sinners over and over again as Jesus gives us forgiveness, salvation, peace and life with God.

Hosanna, save us now Lord. Indeed He does.  And so today, He rides on in majesty to die for you. Hosanna in the highest, blessed is He who comes in the name of the Lord.

In the name of the Father and of + the Son and of the Holy Spirit. Amen.