“Trust in the Lord with all your heart and lean not on your own understanding, in all your ways acknowledge Him and He will make straight your paths” (Prov. 3:5). We have our notions of how we think things ought to be, how we think God should act within our lives and within the church. We react, we plan, we strategize, and much of the time we are left looking back confessing that despite how clever and smart we think we are, the Lord proves Himself and blows us away with that which we downright thought was ridiculous. 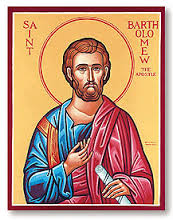 A devout and faithful man, Philip, a man who attended worship and Bible study, comes proclaims to Nathanael (otherwise known as Bartholomew) “we’ve found Him of whom Moses and the Prophets wrote, Jesus of Nazareth.”

It is the “of Nazareth” part that struck Nathanael. It didn’t make sense. Can anything good come from Nazareth? Can anything good come from Virginia City or Dayton or Minden or Gardnerville or the Ranchos? Ironic since Nathaniel was from Galilee, the same region, and while most would belittle all of Galilee, Nathaniel creates his own pecking order. So while some might belittle the whole Carson Valley, others might create such a list to mock.

How would you react when proclaiming where the Christ may be found? We might argue or try and persuade. Philip does none of that, just gives a smile and says, “come and see.” Too often we think it is up to us to persuade or make people believe that Jesus is the Christ. How often you sitting here have said you don’t know how to witness and evangelize. Because while it seems overly simple, not glamorous, it really is as simple as “come and see.” Come and meet Jesus of Nazareth who comes in His Word, forgives sins, comes in body and blood and let Him do the persuading.

Bartholomew comes with doubts, not sure of Philip. He meets Jesus who quickly announces, “behold, an Israelite in whom there is no deceit.” That means he simply calls it as he sees it, no nonsense even if others don’t particularly care for it. Then Jesus blows him away and proclaims how He saw him sitting under the fig tree even before Philip came along.

Now Bartholomew gives Jesus full attention. This faithful Israelite, whose last name is Bar-Tolmai, which means son of Tolmai, indicating a faithful Jew. He would know the Genesis account of Jacob sleeping with a rock for a pillow and the dream of the stairway connecting heaven and earth (Gen 28). Jesus then lays it on him, ““Truly, truly, I say to you, you will see heaven opened, and the angels of God ascending and descending on the Son of Man.” That’s what is greater than any knowledge of him sleeping under the fig tree.

Perhaps a bit a surprise but that’s really the extent of what is known of Bartholomew from the Scriptures. We might wonder why then we have a day to commemorate him. What does he have to do with us? “[T]he history of the saints may be set before us so that we may follow the example of their faith and good works, according to our calling” (AC XXI:1). Nathanael Bartholomew may have doubted, may have expected the Messiah to come in a different manner, but was brought by Christ to confess “Rabbi, you are the Son of God! You are the King of Israel!”

When it comes to God’s presence and God’s promises each of us has doubting family or friends. Each of us also has his or her own personal doubts about God’s presence and God’s promises. This is true especially in the face of suffering or weakness or darkness of feeling. In the face of what is undesired by us. In general, we trust our own understanding. We trust our own understanding even in the Lord’s gifts. So many fret and doubt that they can take a common cup, despite the reality of the minimal risks are the same as that of touching and drinking from a plastic cup handled with bare hands, rather than receive either way with joy and without hesitation. So many doubt the use of the liturgy despite the reality that it builds a vocabulary that forms your prayers by giving simply the words of Scripture and would rather trust our own formations and writings. So many doubt the power of the Word of God to forgive sins that we seek ways to make amends in our own ways rather than receive the forgiveness given in the absolution and Christ’s Word and promise, or doubt God’s Word to create and sustain faith that we try and persuade and argue than just simply say, “we have Him, Jesus of Nazareth, come and see.”

Trust in the Lord with all your heart and lean not on your own understanding. That’s what Nathanael Bartholomew did when he repented of his skepticism and doubt and became a disciple of Jesus of Nazareth. The same Jesus is here right now and sees you, sitting not under a fig tree but sitting right there in that very pew. Just like He read Nathanael’s heart, so also, He reads your heart this day. Nothing is hidden from His view. He is the Lamb of God who takes it all away!

In the weary heart that comes to Jesus for rest, in the heart that hungers for Jesus’ forgiveness and righteousness Jesus sees something else. As He reads your heart, this is His verdict – “Behold, here is an Israelite in whom there is no deceit, in whom there is nothing false. With the confession of Jesus, the Son of God, the King of Israel in our mouths, and with His Body and Blood put in our mouths, He removes our deceit and leads us to speak the truth, just as He did for Nathanael Bartholomew. It comes with His Word of washing and absolving and feeding!  It doesn’t come because you heart is free of all skepticism and cynicism and doubt. It comes to forgive your skepticism and cynicism and doubt. Come and see the one who reads your heart and sees His own righteousness – His own holiness!  The One who opens the heavens to you, and descends, the Son of Man, Jesus of Nazareth, born of the Virgin, suffered under Pontius Pilate, crucified, died, buried, risen, and ascended, that you may be His own and live under Him in His kingdom in everlasting righteousness, innocence, and blessedness.

Bartholomew would live and follow Jesus, trusting in the Lord and not his own understanding. Strengthened by the promises of the Gospel, he faced a horrendous martyrdom, according to tradition flayed, which means his skin cut and peeled off and then beheaded. All for inviting others and Philip had for him, “come and see, Jesus of Nazareth.” He simply brought them Jesus, in Word and in body and blood. He did so for the King of Armenia, whose brother disapproved thus leading to death.

That’s not what saved him though. It was the faith that confesses Jesus, the Son of God, the King of Israel, and receives what He brings in His death and resurrection, in His body and blood, Himself which forgives sins and opens the heavens, and brings you to repentance and faith. Joyfully trust that Word and promise, that forgiveness which is so complete and restores life in the resurrection. Joyfully trust in Him who is the Lord, the King of Israel, who heals your flesh and restores your bones (Prov 3:8) and brings you to Himself, to His table, as He joins heaven and earth in this place and gives you life eternal with Him in resurrection glory.

Come and see, Jesus of Nazareth, in body and blood, given and shed for you. Amen.