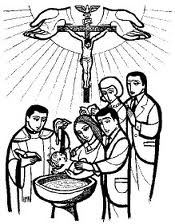 Grace to you and peace from God our Father and the Lord Jesus Christ. Amen.

Trinity Sunday, not often that we have a Sunday to a particular teaching. We don’t have “bodily presence of the Sacrament” Sunday, nor “baptism now saves you” Sunday. I guess there was just Pentecost, in which the Holy Spirit is highlighted, but really it is the historical event of that which occurred and which Jesus had promised 50 days after the resurrection. So why even have Trinity Sunday? After all isn’t the Trinity simply the Lord in who He is? Yes. So we could just call it the Lord’s Sunday. Yet, every Sunday is the Lord’s Sunday, the Lord’s day. It is the very reason we gather on typically on Sunday, it is the Lord’s day, the day of defeat of death and hell, the day of resurrection.

Alleluia, Christ is risen!  He is risen indeed, alleluia!

You see, Trinity Sunday is here simply because of our unbelief. We have Trinity Sunday for the same reason we have other errors in the church, we trust ourselves more than God in His Word; we fear, love, and trust our reason and senses more than the Word who is the beginning and end. It’s why we struggle when we have troubles. We have this tendency to look to our efforts of self-help, motivation, and inner-strength and let’s be honest add to it sports, other extra-curricular activities, drugs, alcohol, or some other activity that makes us relax or feel good, and even other sinful people before we look to help from the Lord, especially in the promised means He gives in providing His preached Word of forgiveness in confession and absolution and the forgiveness He brings in body and blood in the Lord’s Supper.

We trust our own authority, our own voice, to speak for our lives. We’re not all that different today than people have been throughout the history of the church in this regard. On page 319 in your hymnal, we read and confess the Athanasian Creed (perhaps it would be good more than once a year?) because a pastor named Arius concluded with rational thinking that Jesus could not be true God and true man, and people believed it. It’s the debate the initially prompted and lead to the Nicene Creed and later also this Creed. Teaching on the Trinity, the nature of Jesus as true God and true man, has never ceased to be without contention. Many still try and come up with cute analogies, that inevitably fall short, because the Trinity is difficult to comprehend.The reformers faced troubles with similar teachings, during the Enlightenment and for many of this country’s early founding-father, belief in God was deemed acceptable but the Trinity or Jesus as true God and true man. Mormons say they believe in the Trinity, but delve further into the teaching and you find that God and Jesus are separate physical people. Jehovah’s Witnesses and many others deny the Trinitarian nature of God.

Many trust their reason. That God can be three and yet one seems illogical. The Jehovah’s Witness’ website comes a statement that many atheist or agnostics like to make against Christians: “For one thing, the Bible does not mention the word “Trinity.” For another, Jesus never claimed to be equal to God.”

So let’s start there. Is the word “Trinity” found in the Bible?! Well, no. It’s not. Tri (three) une (one) is just a Latin compound word. So is there anything comparable or taught? Well, this Trinity Sunday, let’s start in the beginning. “Elohim” – the Hebrew word used in the Old Testament, translated as “God.” The “im” ending of Hebrew word is similar to English adding a “s,” it  implies a plural. From creation God creates, “let us…” and uses the plural. There will be the argument that “us” refers to the angels and such, except there is no definition of when the angels were created nor were the angels created in the same way as man nor were they made in the image of God. In the creation account we see that God speaks and things are created and the Spirit is hovering over.

John 1 is helpful in showing how the “persons” operate together as one. We hear it often at Christmas. “In the beginning was the Word, and the Word was with God and the Word was God.” Okay, so the Word is God. The Word is through whom all things were made. And the Word became flesh. That means He had a body. That’s Jesus. But see, often times this is the issue, is Jesus true God and true man. Many will say He never says so. Yet, repeatedly He says of Himself, “I AM” in the construction that is the same as identifying Himself as the Lord did in the burning bush with the name “Yahweh, I AM.” Presuming you know Jesus’ words better than those who were there is awfully arrogant considering it is the charge of blasphemy, claiming to be God, that crucifies Him – the people who heard Him speak and around understood that He was saying He was and is God.

So it comes together, that God (the Father) speaks, for Genesis 1 clearly says He speaks. What do you speak? Words. I know. It’s hard to recognize that it could be that simple. The Spoken Word that creates. (Partially hard to recognize how this can be because we can’t do it… of course, recognizing this would have to recognize that we’re not God…. sorry.) So there is one who speaks (Father), He speaks a Word, and the Word is made flesh (Jesus) and the Spirit is hovering over the waters and the face the earth, kinda protecting it. This is the God that created.

Even in the Old Testament Scriptures God speaks yet often refers to Himself in the singular. “Elohim” speaks but usually in terms of “I.” The Old Testament believers confessed in their creed in Deuteronomy, “Hear O Israel, the Lord is our God, the Lord is one.” They confessed because they trusted the authority of the Lord who gave them His Word and promise and redeemed them.

Where we trust our own voice and authority, the voice and authority that creates by the Word, now speaks as the Word is made flesh, crucified, and risen, “all authority in heaven and on earth has been given to me.” Not some of it; not pieces of it; all the authority in heaven and on earth has been given to Jesus. All the power of the Holy Trinity is directed through Jesus. This authority entails all the authority on earth. Whatever authority we think we have, it is given authority from Jesus. For the purpose of that which follows, “go therefore and make disciples of all nations baptizing them in the name of the Father and of the Son of the Holy Spirit, and teaching them to observe all that I have commanded you.”

Jesus even speaks of the one name, the one singular name of the Lord to baptize into: in the name of the Father and of the Son and of the Holy Spirit.

It doesn’t take long to recognize we do not live in paradise created and given in Genesis 1 and 2. We live in sin and death, with pain and suffering, thorns and thistles, all because man could not observe what was given to him. Adam and Eve trusted their own reason and strength to be like God. The same as ourselves to trust our own reason and strength in many of life’s situations and even in matters pertaining to the church.

Disciples made by baptizing and teaching all that the Lord has commanded. Yet we reason that something are too hard to understand so leave them out. Some topics are a little controversial or perhaps shed light on something we don’t particularly agree upon. There is always this tendency to trust ourselves rather than what is given.

Yet the authority of heaven and earth is given in the man Jesus Christ. True God and true man. The one who was and is and is to come. All authority in heaven and on earth given to Him as He comes to you, as the Creator becomes part of the creation, and takes on the punishment and hell of our sin. The authority of heaven He brings is proclaimed in resurrection light. In Him your sin is forgiven. In Him you have the resurrection. The authority of the Word through whom all things were made baptizes you into His one, holy, triune name, Father, Son, and Holy Spirit into His death and resurrection. The one who created from the dust of the ground and made man in His image, still continues to breath life through the Spirit.

“And behold I am with you always to the very end of the age.” Here in ways promised. Promised in all authority in heaven and on earth. On earth too. He doesn’t leave ever to fend for ourselves and rely on our own reason and strength. He comes to us and provides. He provides by means of the government to rule faithfully and justly, He provides medically with individuals and advancements, He provides in marriages and households to create society, He provides monetary and earthly means not just for yourself but in sharing with the poor and needy, He provides in the neighbor who needs consoling, and provides you to be His witnesses, to proclaim His goodness and mercy to your neighbor that they may observe what He commands and gives. He provides as promised, to be with you always, as He provides a means for the Word to be proclaimed, baptism to given, and His body and blood to be received. He is with us always in to the very end of the age, in body and soul, in this life and for resurrection life. He always provides for you. Here forgiving your sin, granting your life with all authority in heaven and on earth. That with David and Peter and the church at Pentecost, we may confess – “‘I saw the Lord always before me, for he is at my right hand that I may not be shaken; therefore my heart was glad, and my tongue rejoiced; my flesh also will dwell in hope.”

The word “Trinity” is not found in the Bible. Teachers in the early church coined the word in order to summarize what the Bible teaches about God. The word is used to express who God is and what he is like. It is clear that the authors of the Bible believed that God is one. On the other hand, they also believed that the Father is God, the Son is God, and the Holy Spirit is God. It should be clear, however, that in choosing one term for God’s one-ness and another for God’s three-ness, we really haven’t explained anything. Scripture’s teaching of the Trinity remains an unsolvable logical paradox. How this can be we do not know and cannot explain. It is not a matter of mathematics or human logic, but a mystery. Remember that in the creeds we do not say, “We understand.” Instead we say, “We believe.”

“Let all the house of Israel therefore know for certain that God has made him both Lord and Christ, this Jesus whom you crucified.” Repent and be baptized. It’s how you are made a disciple. It’s who you are in Him who declares it by His Word and gives it to you in that one, holy name.

In the name of the Father and of + the Son and of the Holy Spirit. Amen.

This entry was posted in sermon, Trinity. Bookmark the permalink.

2 Responses to Trinity: Understood or Believed