O Faithless and Twisted Generation… Let This Sink In 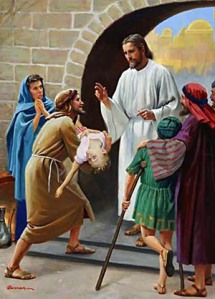 His Time on KFUO Archive with Daily Lectionary Discussion and Morning Prayer, sermonette:

Grace to you and peace from God our Father and the Lord Jesus Christ. Amen.

They had come down from the mountain. The mountain of Transfiguration. Despite all the power and healing, the disciples still didn’t quite get it. I imagine that Jesus still thinks and asks this question, “O faithless and twisted generation, how long am I to be with and bear with you?” Yet, He does bear with us. He continues to rebuke the demons. He brings us to repentance and faith.

We are still in this marvelous Easter season. Daily we hear of just this reality, we have just recounted the Lord’s death and resurrection, we proclaim it each time we partake in the Supper, but how often do we still not understand it.

We still have this temptation to look to our earthly ways. We still fight this tendency to reject Jesus along with the rest of the world, reject Him for sporting events, reject Him for fun vacations, reject Him placing business adventures first. There is a tendency to make preparations for Jesus, but when He comes it is just like Samaria. The people do not receive Him. Because His face set toward Jerusalem, where the Son of Man will be delivered into the hands of men.

His face is set towards His cross. For this faithless and twisted generation He faces Jerusalem, He willingly suffers at the hands of men. He does so to drive out the demons. He does so to finish the work of salvation. For us who daily sin much, for us who at times just don’t seem to get it, He rebukes the demons; He bears with us, forgives us, and receives you, His child, that you who are least may be great. He bids you to follow Him. Follow Him as He brings you through death and in resurrection life in His gifts of baptism.

We who have celebrated the Lord’s resurrection, still continue to receive those gifts. Your sin is forgiven. You are the child received.

Let these words sink into your ears: The Son of Man was delivered into the hands of men. Delivering them and delivering you from sin, death, and hell. Declaring you His child. As we follow by His grace in death and resurrection and are received into the kingdom of God.

And the peace of God which passes all understanding keep your hearts and minds in Christ Jesus unto life everlasting. Amen.