Purification of Mary and Presentation of Our Lord

Posted on February 4, 2014 by Christopher 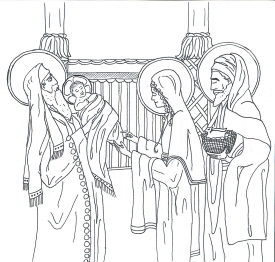 It’s only been 40 days since Christmas Day. I’m sure for many of you Christmas seems well into the past. 40 days have flown by and much has gone. It’s even a new year. If you were living at the time of Jesus’ birth, it would have been almost a year and a half ago, 70 weeks, that the angel Gabriel announced to Zechariah the priest that he and Elizabeth would have a child, John, who would prepare the way for the Messiah.

Put it in our time span of what has happened in this amount of time. 490 days. September 30, 2012 was 490 days ago. This sanctuary still had chipped paint and orangish pews and the old carpet. 2 Thanksgivings and Christmases have past. Health insurance mandates were being debated in theory. Some of you weren’t members or even baptized Christians. The Boston Marathon was bombed, there has been a new pope elected in the Roman church, countless tragedies of typhoons and tsunamis and tornado destructions.

It’s in that span of time that Jesus is brought to the temple. The 40 day old infant comes 490 days after Gabriel’s proclamation. Fulfillment is what is happening. 70 weeks, 70 times 7, 490 days later the 40 days come to an end. There is a strong undercurrent that often goes unnoticed and ignored on days like this. There is no fan fare for the purification of Mary and the presentation of our Lord like there is for Christmas. And yet there is just as much fulfillment and going on for your salvation.

Those numbers may mean something to you because you’ve heard them in the Old Testament Scriptures. These are numbers and days of fulfillment of God’s Word and promise in the desert, in Passover, to Daniel. In this 40 day old child, the entirety of the Old Testament is coming to its focal point and fulfillment. In the Lord’s temple where lambs were brought as a sacrifice for sin, as Passover lambs were slaughtered to recount the 40 years of wondering in the desert, God’s perfect lamb comes and does everything the law requires even little details as given in Leviticus like this. Even at 40 days old, just as He did at 8 days old in circumcision, Jesus is fulfilling the Law perfectly.

The 40th day sacrifice though wasn’t for the child but for the mother. Even now, 6 weeks, 42 days, are the number of days encouraged for mothers to rest after giving birth. Because live births are a bloody mess and the bloody effects of the mother continue for 40 days, and after that time she must be made clean and pure. God’s Son fulfills the sacrifice. The Redeemer of the world places Himself under the Law for you. Everything the Law requires of you, Jesus takes upon Himself. Here we see Jesus doing what Jesus does, taking the Law upon Himself, becoming sin for us so that He can redeem us.

Everything in the Old Testament is being fulfilled in Jesus. Centuries of waiting, anticipating coming full steam into view. And just like today, the world and even those who believed in God hardly took notice. The world and even the religious community only saw a 40 day year old baby coming to the temple as the parents pay their dues. Only two people took notice of the Christ child that all of Israel had been anticipating, Simeon and Anna. No priests. No teachers. No lay leaders like the Pharisees. And they would have missed Him too if the Holy Spirit had not told them, just as you would miss Him if the Holy Spirit had not given you the Word and faith.

And so we hear the wonderful confession of Simeon, the Nunc Dimittis, Latin simply for the first two words, now depart. Lord, now let your servant depart in peace for you Word has been fulfilled, my eyes have seen your salvation. Familiar words. You know them. You sing them often after the Lord’s Supper. We don’t know how old Simeon was, but we know he was promised by the Lord not to see death until he had seen the Lord’s Christ, the Messiah. You see, Simeon gets right what we often get wrong. Often we think we need to come to church to feel good about ourselves, to boost our self-esteem, to get uplifted and inspired in some way. While desiring to eliminate religion in society, Karl Marx called all religion an “opiate of society” that is a drug and addiction. That’s actually true for many. We want a religious high. We want advice on economics, marriage, parenting, health, and anything else that is on our mind and going on if our life. It’s our high, it’s our drug. People often don’t want to hear their sin and that they are dying. It doesn’t feel good to talk of our death.

But we forget that is precisely why Jesus has come. Our sin. Our death. He comes to fulfill the Law perfectly. He comes to die in our stead. Simeon would continue where our Gospel reading this morning ends and speak that this child is appointed to falling and rising of many and that a sword would pierce Mary’s soul as well. Simeon confesses it right. This child will die, it pierce His mother’s heart, but in His death many will rise and fall. Many will rise in faith in this Christ child, many will fall in unbelief. Many will receive Him as He comes and gives Himself and many will reject in some way or another.

You’ve been in Simeon’s place. You too see with your eyes, hold in your hands the body and blood of Christ. There is the fulfillment of Israel. The body and blood of the one born of Mary, the one laid in the manger a mere 40 days ago, the one nailed to the cross, the one risen from the grave, ascended, and sitting at the throne of God gives us Himself so that we like Simeon can depart in peace.

I used to think, and I’m sure many of you too, that this meant we were at peace with ourselves and ready to head out the door. But make no mistake about it, Simeon is confessing rightly, that he is ready to die. He can now depart this world in peace, knowing in full faith and confidence that the Word of God is fulfilled. That’s the work in our life for which Christ came. To deal with death.

All the other stuff is sin and effects of sin. Our sickness and diseases, our moments of depression, our economic struggles and greed, problems with friends and family, that’s all sin. We are full of it. We are dying from it. We need forgiveness. Forgiveness doesn’t mean just to say things are okay, but it means to be released. We need to be set free from sin.

That’s why our Lord comes. That’s what we gather for each and every week. To be set free from sin and death, to receive the forgiveness that comes in the perfect fulfillment of the Law and the death and resurrection of Christ. Like Simeon, we have seen the Word of God fulfilled in Jesus. Like Simeon we have the Word made flesh in our midst, embrace Him with open arms of faith, and in Him your sins are forgiven. Now we can die and rest in peace. You have seen and received the salvation of the Lord and know that it is yours in the person of Jesus. The babe of Bethlehem, the 40 day baby who perfectly fulfills the Law, does so on your behalf so that He may give you light and life. Go, depart, in peace.

And the peace of God which passes all understanding, keep your hearts and minds in Christ Jesus unto life everlasting. Amen.

This entry was posted in Uncategorized and tagged Christmas, Mary, Old Testament, Sermon. Bookmark the permalink.
%d bloggers like this: